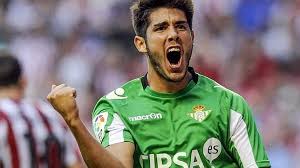 Pozuelo scoring against Athletic Bilbao in a 5-3 away victory.

So it is official, Alejandro Pozuelo is a Swansea City player; joining former Real Betis teammate, Jose Cañas, in the process. In my view, Pozuelo has the talent to become established as a full Spanish international in a few years time, once he has played regularly at the top level. For those that are unfamiliar with Pozuelo, he is an attacking midfielder with a great touch and quick brain who sits off the front man.

As for Betis, he is the one that got away.

Let’s talk stellar evolution. From a bit of dust and gas we get a nice nebulae, also known as molecular clouds (talent and potential). After millions of years (training and luck) these protostars may settle down and form a main sequence star (professional footballer). Pozuelo is at this stage. He has however got lots of hydrogen atoms wanting to fuse together but only if he puts the effort in. This will eventually lead to the creation of a helium core, thus powering the star (Pozuelo) on to the next level: subgiant. Once he is here he can then naturally progress onto the red giant phase (career pinnacle), before he fizzles out and collapses into a white dwarf.

Now, at Betis he has not been given the chance to move onto that next level. This hasn’t been Betis’ fault per se, he has had injuries and ineffective spells and in short it just hasn’t really happened. At the start of the season he was my ‘one to watch’ – this was a pre-season article I did last summer for Inside Spanish Football highlighting his talent. I thought he could stamp his mark on the season just gone but he never had a sustained run in the first team, which was due to inconsistent performances and injury. A move to Swansea may provide that extra kick he needs, especially with Michael Laudrup at the helm.

He was contracted to Betis until 2015 but was threatening the club with legal action because he felt this contract was ‘forced’ upon him. Rubbish in my view as other players have received the same contract and are absolutely fine. Swansea will need to keep tabs on this diva-ishness.

Despite this unsavouriness, at around €500,000, Swansea have got an absolute steal. It was not long ago that Pozuelo was being linked to Manchester United and ratings such as £4.5 million were being banded around (by The Sun).

Although we have lost a possible star, it will be exciting to see him ply his trade in the Premier League next season and see whether he can fulfil that potential that he undoubtedly has. I say buena suerte to this young Sevillista.

United linked with Pozuelo (image from The Sun)