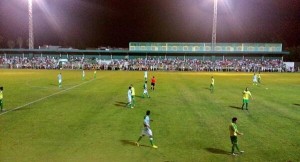 Real Betis Balompié kicked off their pre-season campaign with two convincing wins against Tercera opposition. Lots of Seville-based media described the “buenas sensaciones” – good feelings – that are surrounding the club as the head into the new season.

First up on Friday night came Los Barrios, a club based in right down in the south of the Province of Cádiz. Los Barrios ply their trade in Grupo 10 of La Tercera División, thus a comfortable win was always expected. Betis ended up 7-0 winners with goals coming from Jorge Molina (a nice lob), Caro, Cedrick, Rubén Castro (2), Álex Martínez (great freekick) and Salva Sevilla.

The next night Betis took on Arcos CF, who play in the same league as Los Barrios. This time the winning score was 5-0. Betis were 3-0 up half time with goals from Molina, Chuli and Juan Carlos. Two more goals were added in the second half thanks to Rubén Castro and Nacho.

Videos of both of the games can be seen here on Betis TV, although the quality isn’t great.

As standard in these friendlies Pepe Mel fielded pretty much two completely different ’11s’ for each half. It’s nice to see that almost all the new signings have had a run out and got some minutes under their belt: Verdú, Cedrick, Juanfran, Chuli, Lolo Reyes and Anderson.

Players who have stood out in these early encounters include Juan Carlos, Cedrick, marauding right wingback Juanfran and young cantero Carlos García. Rubén Castro has bagged three goals so far but he is not yet firing on all cylinders, missing a hatful of chances against Los Barrios and a penalty against Arcos. Maybe a few too many off-season manzanillas.

It’s been a great, positive start to this exciting season ahead and there is a real buzz around the club. Betis have two more friendlies to play (Coria del Río and Sporting Braga) before they embark on their English campaign.