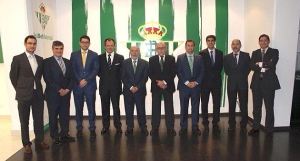 The new board: Ollero is the small guy in the centre in the dark suit.

It was just five months ago when Juan Carlos Ollero was elected president of the great Spanish instution that is Real Betis. Before that event occured, Betis were enduring, at best, a slight state of disturbance: at its worst, it was all-out tumultuous turmoil.

As we know, at the start of the 2014/15 season because had just dropped down from the pinnacle of Spanish football, La Primera. The club was in disarray and this was reflected in the league form running up to Ollero been sworn in at the end of November: Won 6, Drawn 3, Lost 5. In short, not the form that would see Betis ascend again to the top level.

In came Ollero, the man from the Spanish enclave of Melilla, surrounded by Morocco in Northern Africa. The turnaround of the club since his election has been like the mountain range in the south island of New Zealand: Remarkable(s). Since Ollero the form guide reads: Won 15, Drawn 5, Lost 1. Of course, Ollero has nothing to do with the training of the players or team selection. What he does do is make decisions.

The very first decision he made was to say hasta luego to the first team manager, Julio Velázquez. The result was an immediate change in fortunes. The last four games before Velázquez was sacked read: LWDL. The four games immediately after his sacking, under the interim management of Juan Merino read: WWWW.

Ollero had a decision to make now. Does he stick with untested Merino or sign a more experienced first team coach? As he put it, it was, ‘una decisión muy meditada y en cierto modo arriesgada’ – a very thoughtful and somewhat risky decision. He signed fan-favourite Pepe Mel who just a year ago had been sacked after a bad run of form in La Liga and even more recently had been sacked at English club, West Bromwich Albion, after not been given much of a chance. You win some, you lose some. For Betis, it was a winner. 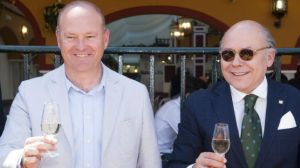 Pepe Mel and Juan Carlos Ollero with a drop of fine sanluqueñan manzanilla. Let’s hope they will be celebrating come the end of the season.

Mel was appointed first team manager once again, but not before Juan Merino had been rightful commended for the stupendous job he did in the intermediate; a job Béticos won’t forget. Merino returned to his role as coach of Real Betis B team, plying their trade in Segunda B.

In more recent times, the board at Betis have made another possibly key decision in the signing of new sporting director, Eduardo Maciá. In just two days time, his tenure at Betis will begin. Ollero is hoping that Maciá can, ‘alleviate the historical deficit at Betis.’ Maciá comes from a good pedigree having held similar talent scouting positions at Valencia, Liverpool (with Rafa Benitez), Olympiacos and Fiorentina. He is going to working closely with Pepe Mel to plan the future with two current hypotheses in mind: one that Betis will be promoted, the other that they won’t. Luckily, it looks like it is going to be the first hypothesis. 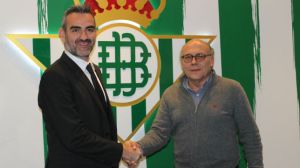 So, the steady ship Ollero is going strong. He has already made some tough, but progressive, decisions in the hope that Betis can move through the gears once again.