Up next in Betis’ path are Liga Adelante new boys, Llagostera. 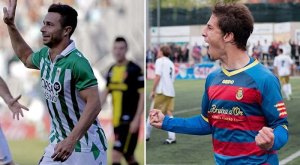 Who?!? I hear you cry! That’s what I asked myself at the start of the season.

Llagostera are a team based in Girona in Catalunya. They are the smallest town ever to have a team compete in the top two tiers of Spanish football. With a stadium capacity of 1,500, they have been playing their home games at Estadi Palamós, about 20 miles away. Despite being the new team on the block, they have had a successful season so far and are currently occupying 8th place.

Betis have already played Llagostera twice this season, once in the league and once in the Copa del Rey, winning by 2-0 on both occasions. We will be hoping for a similar result this Saturday afternoon at El Estadio Benito Villamarín, which has a slightly bigger capacity of 56,500, although I doubt there will be quite that many there this weekend.

As far as team news goes, it is all a little quiet. This morning (Friday) the team trained behind closed goals with new sporting director, Eduardo Macià, in attendance at his new green and white home. The squad list is not being released until Saturday morning. Pepe Mel is taking no chances as his team close in on automatic promotion and is remaining completely focussed. The only players that definitely won’t be in the squad are the injured Javi Matilla and Álex Martínez.

Los verdiblancos are in fine form and are motoring along superbly as the season end approaches. Last weekend they beat Alavés away from home, 1-2. If you missed the highlights, here they are.

In other news, Sevilla and Betis have put their rivalry apart and united for a much greater cause. This week they teamed up with UNICEF to raise as much money as possible for the horrifically destructive earthquake in Nepal. 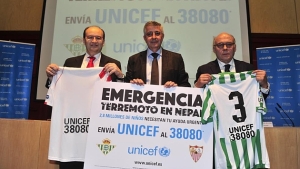 For Nepal: Sevilla and Betis unite