After signing a new contract this week keeping him at Betis until June 2017, Francisco Varela has announced that midfield superstar in the making, Dani Ceballos, also wants to stay el Benito Villamarín, as speculation continues about where his future lies. 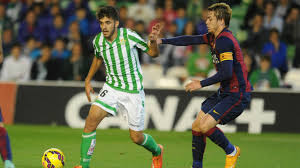 Ceballos in action against Barca B

If you haven’t heard of Dani Ceballos yet, you will do in the near future.

Valera, who has come up through the Betis youth set-up with Ceballos, came in for criticism when he first broke into the team and some fans doubted his potential. However, he says that he has now demonstrated this season that he can play for Betis and do a good job at left back. Upon the subject of Ceballos, Valera is certain: 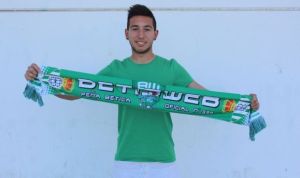 Varela has signed a two-year extension

Varela has played in the same youth team as Ceballos since 2011, which implies that he has a good understanding surrounding the subject, although he states, ‘I don’t know the conditions of his renewal.’

The 20-year-old also heaped praise on the philosophy of new sporting director, Eduardo Macià. Varela says, ‘as a canterano, I am proud and happy that Macià has come with this idea to promote youth team players.’ He then insisted after learning his trade with Betis B, he is here to stay as a member of the first team.

Let’s hope Ceballos has the same intentions. The young Sevillano is having a brilliant time under Pepe Mel, influencing games and already becoming a key player at the tender age of 18. He has already featured for the Spanish u-21s, making his debut earlier this year in an impressive performance against Belarus. Now, Ceballos has been cited to play for the u-19s during the youth equivalent of the Euros, set to be played out in Greece between the 6th – 19th July. However, Spain has not yet qualified for the tournament.

The problem for Betis is that being a part of this squad would require the player attending a period of training in Madrid to prepare to qualify for these finals and then attend the finals themselves. In typically Spanish fashion, this training is scheduled for next week! As the season comes to a conclusion and with Betis still fighting it out for promotion to La Liga, the last thing they want is a disruption to their training regime with one of their best players missing. Should Ceballos be selected for the squad, he will then be required to take part in the Ronda Élite classification between Spain, Portugal, Turkey and Georgia. This mini-tournament is taking place during the penultimate jornada of the season, which could be vitally important to Betis’ promotion credentials. On this weekend, Betis face the tricky task of taking on Tenerife away from home and they will certainly want one of their most influential players available.

If Betis are not already promoted by this point, they can take the problem up with RFEF to ask for permission to keep Ceballos for such an important game.