Betis will be a La Liga team by the end of the day, if one of three scenarios occur:

Both Girona and Sporting play earlier this afternoon, so by the time Betis grace el Villamarín later on, and results have gone their way, they could already be in their natural place. If not then it is Betis’ own hands where they are likely to be playing in front of 50,000 La Liga hungry Béticos. 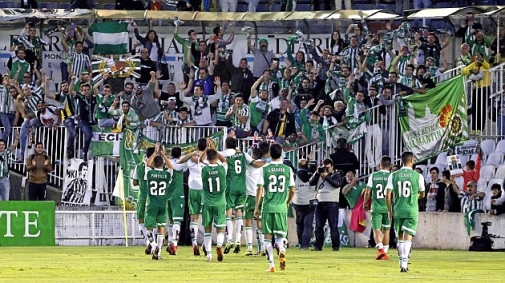 On Thursday evening, Betis helped their ascension cause by placing a foot in La Primera with a 4-2 away win at Racing Santander. Two more goals from the unstoppable Rubén Castro, another from Jorge Molina and one from Bruno ensured that Pepe Mel’s men would return from northern Spain with all three vital points. 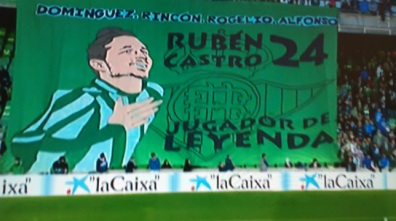 Racing took the lead early on, but Betis were quickly back on track with a solid Bruno header from a corner. Betis were 2-1 up by half time after a sublime goal from Rubén Castro. He cleverly combined with Kadir to then curl the ball into the top corner, ricocheting in off the post. The third came from Castro again as he lobbed the keeper from the edge of the area. The victory was assured by Jorge Molina smashed the goal in the top corner from outside the area with a suspected toe-bunge, whatever way he connected it was certainly a golazo. David Concha grabbed one back for Racing, but the game ended 4-2.

Pepe Mel made a few rotational changes on Thursday to keep his starting line-up fresh. He is likely to change it up again this Sunday with a likely line-up of:

The team from Madrid, Alcorcón, haven’t got much to play for. They have secured their place in La Segunda for next season and could still technically make the playoffs, but it is unlikely. Betis will be playing in front of a raucous crowd who will be in fiesta mode.

Today could be the day Betis have been wanting for more than a year. If so, they will put the whole debacle of mis-management and the bear pit of La Segunda behind them.

Kick off is 7pm GMT (8pm in Spain). If you’re that way Twitter inclined, be sure to use the hashtag #yosoyverdiblanco – an initiative started by the club to get everyone in party mood. Also, look out for the huge surprise banner that Betisweb have prepared, which will be in similar vein to the Rubén Castro Jugador de Leyenda banner just above.

One thought on “A Return to La Liga Promised Land?”