The second half of Betis’ pre-season continued today as the team touched down in Germany. I think it is fair to say that Betis have been much more successful off the pitch so far, than they have on it.

Let’s start with the positives:

Not so good news: 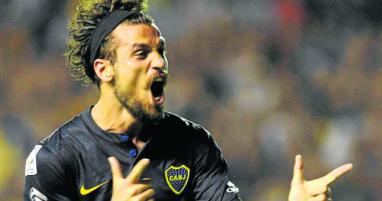 Osvaldo: may be joining Betis on their pre-season tour (image via estadiodeportivo.com)

With their arrival in Germany, Betis have finished the ‘first stage’ of their pre-season, which consisted of the usual training camp in Montecastillo (near Jerez) where they are put through their paces. They have taken the same players over to Germany who started the pre-season (+ Ceballos), but have left a few of the youngsters at home to join back up with Juan Merino’s B team. They have also left a few first team players away – Vadillo, Kakir, Lolo Reyes (who is in Chile looking for a club) and Pacheco (who is going to sign for Alavés).

Betis have arrived in Germany to: 1) get away from the Seville heat, and 2) face slightly different opposition. They will play two games in Angela Merkel’s kingdom: Darmstadt 98 (Friday 31st July) and Borussia Dortmund the day after (Saturday 1st August) – and no I’m not sure which bright spark planned that one. The Borussia Dortmund friendly will certainly be the most testing opposition that Betis will face during the pre-season.

Pepe Mel is still looking for a forward and has been heavily linked with former Southhampton player Dani Osvaldo in recent times, although he is proving difficult to pin down. To complete the ‘project’, brain child of Mel and Macià, Betis still need a defender and a fast winger. Recently linked to the club has been Werder Bremen player, Izet Hajrovic. The Bosnian international is 23 years old and player at the World Cup last year in Brazil.

The other name that keeps cropping up in regards to Real Betis is Marco Asensio. Asensio is an employee of Real Madrid who played for Mallorca last season on loan. He is going to be loaned out again this season with Madrid wanting the Spanish youngster to get some minutes under his belt. Asensio is a good talent and recently starred during Spain’s u19 European championship victory earlier in the month where he played alongside his new mate, Dani Ceballos. Despite this, he won’t be going anywhere until 15th August as he is competing in Real Madrid’s pre-season tour.