Just when I, and a few other people, thought Betis had found their style, a new effective way to play, they have put in two very poor performances in the last two weeks.

A crushing 3-1 defeat at home to Espanyol last weekend and a lacklustre 1-1 draw away at Granada yesterday has left many béticos with a sense of emptiness and lack of optimism in regards to the future; in particular to the future of cult hero Pepe Mel. Before the international break things were fairly rosy at the club but since the return there’s a certain lingering sense of foreboding around the club.

ABC de Sevilla journalist, Mateo González, writes passionately today about the club asking – do Betis know how to play? What is our thing? Do we keep possession and try and break teams down with nice, attractive football? Do we sit back and play the counter attack with Joaquín and Rubén Castro punishing teams on the break? Do we play with a quick tempo or a slow tempo or something in between?

Yesterday at Granada, who were rock bottom, Betis looked bad. They conceded after 2 minutes and that threw them off the whole game. Rubén Castro slotted home a penalty near the end of the first half during a period of 10 minutes were Betis looked half-dangerous. Aside from that, we didn’t see anything in regards to flair, spirit or capability.

Pepe Mel said, “we had too many hesitations”. It seems to be the same problem: if it’s not Rubén Castro then it’s nobody. Mel started Rennella up top who contributed precisely nothing. Summer signing Portillo, who hasn’t really impressed me, also did nothing.

Despite signing a new contract after months of wrangling and committing his immediate future to Betis, Dani Ceballos was left on the bench, although he is easily one of our best players. Why? Not sure. He came on in the second half and had no impact whatsoever. Don’t really blame him, the game was half dead.

Let’s be clear, Betis have made a decent start to the season. They are sat in 10th place, with 12 points from 9 games: three wins, draws and losses apiece (exactly the same as Sevilla). The only aim of this season is safety. Do not get relegated. So, for me Pepe Mel’s job should not be under fire.

However, a few béticos are starting to panic and get a little worried about the unfolding situation. It seems that Betis have lost their mojo and impetus. Historically, Pepe Mel’s team are attacking, exciting and good to watch. Defence was always a second thought and this fitted the Betis philosophy perfectly. It didn’t work all the time but the fans liked it. However, Mel got accused of a lack of tactile nouse, the inability to adopt a different approach to get a result. I know I used to write about it at the time. 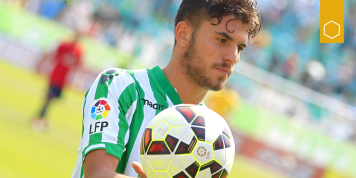 Build the team around Ceballos

Right now we are seeing a whole lot of nothing. As Mateo González says, with the likes of Rubén Castro, Joaquín and Ceballos, Betis have the talent that their rivals for relegation just don’t have. The team needs to be centred around these 3 – sin duda! Combine these with Alfred N’Diaye in centre-midfield, Westermann/Bruno centre-defence and Antonio Adán in goal and Betis have a very solid team.

We have seen a few versions of Betis already this season and right now according to Miguel Ángel Benítez Merelo, we are seeing a flat and grey version. Like Mateo, Miguel writes passionately about the two versions of Pepe Mel. The first when he took over and the second version since his reinstatement. Miguel says Mel is now more defensive and more resultadista – driven by results and not the brand of football that made him a fan favourite.

He and I’m sure the majority of the fans want to see good football. Boring just isn’t Betis. The club motto – long live Betis even when we lose – relates to the football played. If the players but in an entertaining performance full of heart and determination, the fans will love them. Despite this there does need to be an element, a slight element, of results play. The last thing we want is to be back in la segunda again. This balance needs to be struck.

Watching the game yesterday I was urging the team to do something. At 1-1 the game was there for the taking for both sides. I wanted to see Betis go for it! Try and sneak that second goal – like they did at Sporting Gijón – and show a bit of ambition. If they concede whilst going to win the game then so be it, shit happens. That’s what used to happen. Perhaps Mel is trying to move Betis forward to become a more ‘effective’ team? Miguel doesn’t want this Mel.

I do agree, but I think getting rid of Mel now would be both cold and stupid. They did it last time and the club still ended up getting relegated. He deserves to have the time to get his team playing the way he wants. What he does need to do though is but Dani Ceballos in the centre of midfield and build a team around him.