The joint best away form of La Liga so far? Any guesses? Barcelona? No. Atlético? No. Real Madrid? Yes. And from my leading question you can probably sense the other; Yes, Real Betis!

Both Madrid and Betis have accumulated 14 points on the road this season from seven games. The other likely teams mentioned above are not far behind, but that just proves the point that Betis have potential. When I found out this stat this weekend it’s fair to say I was very surprised. Sevilla on the other hand have just three points from six games away from home and have still not won yet.

It’s Betis’ home form which is drastically letting them down, which again is another surprise the opposite really of what you would expect. From six home games, we’ve won just one, drawn one and scored a terribly low four goals. If our home form was as good as Sevilla’s (four wins out of six), which could easily be, we’d be 4th in the league. ‘If’ is a flimsy word though – if my auntie had balls, she’d be my uncle.

The fact is, Betis are depending on their away form at the minute to be sitting mid-table. They are also depending on someone else, as they have been for many years…

I know I’m certainly repeating myself again, but we rely too much on Rubén Castro, let’s just take a screenshot of the last 5 games. 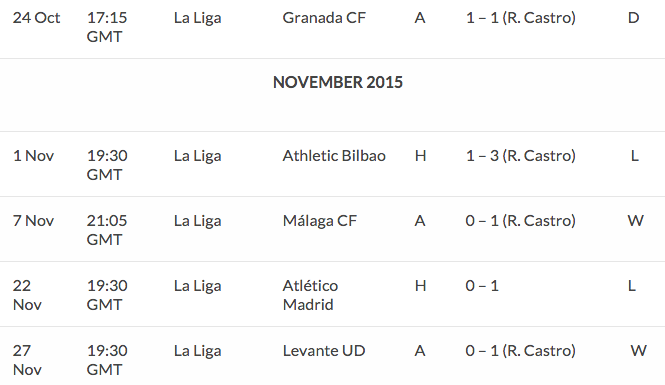 A few things here stand out for me:

All teams have a player or two who does the magic for them on a consistent basis. Rubén broke another record this weekend when he scored, becoming the first bético to score in five consecutive away games. The goal was a peach. Typical play and finish from the marksman. It came from a Joaquín corner who played it short to RC after a sprint across the penalty area. Rubén played it back to Joaquín who coaxed the defender and sold him a dummy before taking the ball past him and giving it back to RC who’d made a very clever run towards the corner of the area. He takes a touch, gets it out of his feet and sweeps the ball low and hard into the opposite corner. Superb.

Despite this brilliance between two players, there needs to be another two or three players (ideally) who can step up to the plate when necessary to dig their team out of the shit when needs be – Betis don’t have this…yet.

Another positive emerged from this weekend, which may appease Betis’ home form, and that was the performances of Dani Ceballos. Let’s have a look at a few headlines: 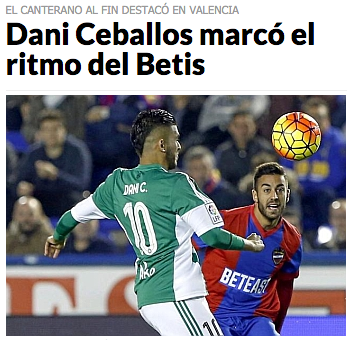 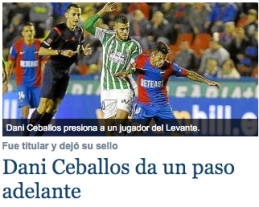 Finally, Dani Ceballos put in a performance we’ve all been waiting for. He ‘marked the rhythm’ and stepped forward, at last showcasing the same form which he’s been displaying for the Spanish u21 side. He started the game and repaid Pepe Mel’s faith by showing quality and determination.

Jesús Sevillano writing in Spanish newspaper Sevilla ABC, said, “He was more centralised on the field, mentally speaking and in his position.” Jesús now says the question is whether Dani can take a step up the next rung and play 20 metres further forward where he will be able to cause damage to teams. Completely agree. Vamos a ver…

Next on the radar for Betis is a midweek Copa del Rey tie against Sporting de Gijón. As we know, all Copa del Rey match-ups are two legged and this Wednesday’s game is at el Benito Villamarín, time to get over that home form hoodwink.

Betis have played Sporting already this season, beating them 2-1 away from home in a second half comeback. It would be nice to have a good CdR run this season, so I’m very much hoping that Pepe Mel goes for this one.