Fairly big game coming up this evening, one being billed as a February ‘final’. Both teams are in their promotion season, split by just three points in the bottom half of the table and striving to move away from the feared relegation zone.

I’m not sure I would describe it as a ‘final’ but it’s certainly a game Betis should be eyeing with a victory in mind. The teams have faced each three times already this season, twice in the Copa del Rey – two wins to the verdiblancos and a draw. So, it’s fair to say the teams know each other, likely tactics and what to expect.

Betis haven’t lost so far in February, which is quite an achievement in comparison to January where they didn’t win any of the seven games they played. A win against Valencia and a draw means Juan Merino’s men are in a fairly buoyant mood.

Sporting’s form hasn’t been too bad either. Their last match was a loss to an outstanding Barcelona side, but aside from that they’ve had a couple of draws and beat Valencia and Real Sociedad in their last five. 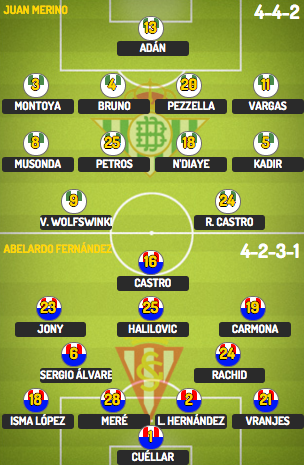 Picture on the right shows Marca’s prediction of tonight’s teams. Van Wolfswinkel didn’t have the best game last time around and neither did Kadir, so I’m not sure they’ll start this time around. However, Van Wolfswinkel does work very hard and offers something slightly different, he just needs to start scoring! He did actually score last time Betis and Sporting met. Instead of Kadir, I’d expect Joaquín or Dani Ceballos to come in.

A name that stands out for me is: Musonda. He’s had a big, positive impact on the team since joining on loan. Attacking, direct and dangerous, plus he bagged his first goal last weekend at Deportivo.

Sporting have a couple of dangerous players going forward in Jony, who Betis tried to sign in the summer, and Halilovic the young and very talented Croat on loan from Barca.

Their defence however is suspect so I expect Betis to go at this and try and notch a few goals on the scoreboard. It’s about time we scored another two or three goals in a match – tonight could be the night.