There has been somewhat of a personnel revolution this summer at Betis. Such as the pace and rate of change at many Spanish football clubs, Betis are no different.

In just over 6 months we have seen the election of a new president and new boardroom, the sacking of a not so long since instated sporting director Eduardo Macìa, the appointment of his replacement director Miguel Torrecilla, the appointment of a new manager in Gus Poyet (plus his backroom staff), 10 new player signings by the latter two appointments – David López just confirmed as the 10th – and 15 players gone.

I was recently interviewed by GJ Sports Blog about Betis – how the mood is in camp, pre-season, summer activity, Gus Poyet, this season and young players, amongst a few others. You can read the full Real Betis Season Preview here.

It is hard to keep pace at times, and it certainly does keep me busy, but nonetheless the show does go on, and it starts this weekend! 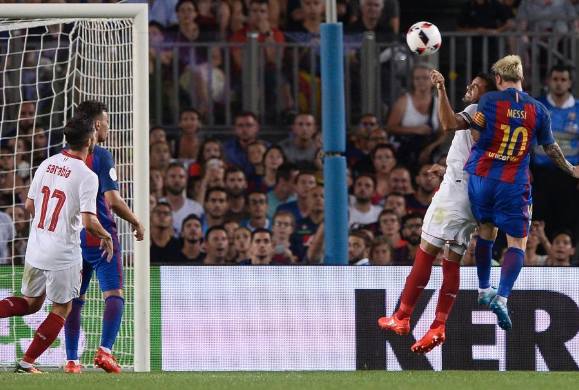 Betis have had a particularly good pre-season by there usual rocky standards. We’ve played 10, won 6, drawn 3 and lost just once. Of course, this doesn’t count for anything but Gus Poyet has had plenty of time for experimenting, integrating the new players and finding (hopefully)the winning formula.

All this means that los verdiblancos approach the first game, which could not be any more difficult by the way, in good spirits and plenty of time to set up. Yes, new players wouldn’t have gelled just yet but there is a mix of old and new and it seems like there is a good feeling running through the club.

So, Barcelona. Can Betis really plan to get anything out of this game?

I think so yes. It is unlikely, but I think it is far from impossible.

It’s going to be a very different starting 11 to enter onto the hallowed Camp Nou turf from that of this time last year against Villarreal. Five of the starting 11 from the first game of 2015/16 have now left Betis (Vargas, Xavi Torres, N’Diaye, Portillo & Molina) and a few others are out of favour.

In Gus Poyet’s last pre-season game against Red Bull Leipzig, which gives us a good indication for Saturday, he started with:

I suggest against Barcelona it will be something similar, perhaps with the Dani Ceballos in the centre and possibly Tonny Sanabria partnering Rubén up front or more likely occupying a wider position in a 4-1-4-1 formation.

Poyet has also played a more defensive 3-5-2 formation on several occasions this pre-season, which would see Bruno, Mandi and Pezzella play the 3 centre back positions and Durmisi and Piccini the wing/full backs.

As for Barca, there aren’t heading into the game in tip-top condition. They will be missing a few key players, including Mascherano, who’s injured along with Iniesta and Mathieu. New signing Andre Gomes is suspended and Neymar and Rafinha are playing Olympic football in Brazil. Their number 1 Claudio Bravo is being heavily linked with Manchester City and they have lost influential full back Dani Alves.

It’s not all bad, however. They do have Messi and Suárez and have just won the Spanish Super Cup by 5-0 on aggregate against that other team from Seville, who look to be much weakened from last season having lost Kevin Gameiro, Ever Banega and Grzegorz Krychowiak.

Arda Turan popped up with two goals for Barca during the second leg with that new guy with blonde hair getting the third (see picture above). Both will play on Saturday against Betis but we hope that Gus Poyet with have masterminded a tactical coup to thwart them.