Eduardo Macià’s office has been a busy place since he took over in May. Since the season end it seems like Betis have been linked to a new player every day.

Sporting Director Macià and Pepe Mel are working hard to ensure that Betis have a squad that can first of all survive their first season back in La Liga, and secondly move forward in future years to compete at a higher level.

VdV has talked about the ‘marvellous’ project on-going at Betis

The signing of Rafael Van der Vaart is an indication of this, although it still hasn’t been made official. However it is now being widely noted that Van der Vaart will arrive in Seville on Sunday night, finalise the details and hopefully sign on the dotted line tomorrow for Betis! He will no doubt give the club a boost, provide lots of experience for the younger players and increase bargaining powers with other agents and potential players too. 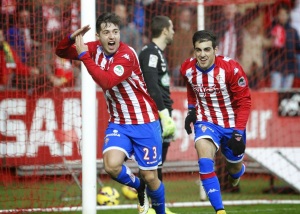 Jony on the radar

A player Betis would very much like to sign is Jony Rodríguez of Sporting Gijón. The 23 year old fits the winger bill that Betis need to fill. Exciting going forward but also capable of helping out in defence. It will be a tricky signing because Sporting have also just been promoted from Segunda to La Liga, so they will not be wanting to let go of one of their star players. It will take a few million to prise him away from the north of Spain.

Los Verdiblancos have been linked with Fiorentina (where Macià used to be Sporting Director) midfielder, David Pizarro, who is currently playing in the Copa America in Chile. However, a move for the brother of Claudio, has been ruled out by Betis secretary Alexis Trujillo. The centre of midfield is a fairly full at the minute with N’Diaye, Ceballos, Xavi Torres, Lorenzo Reyes and as of tomorrow, Van der Vaart. 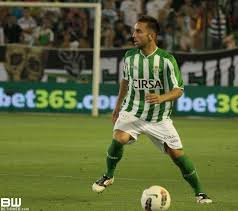 Nono is on his way out of Betis

The three players who went on loan in the winter – Nono, Sergio Rodríguez and Chuli – will find it difficult to stake a place in the squad next season. Macià is set to have a meeting with each player in the near future to tell them if there future lies at Betis or not. Chuli is the only one I think who has half a chance of being kept on after scoring 11 goals in 21 games whilst on loan at Leganés.

As for Nono, who never really impressed me, he went on loan to second division German club Sandhausen and failed to make a single appearance. Unfortunately the future for him doesn’t look too bright.